The anti-medical dogma of Christian Science led my father to an agonising death. Now the church itself is in decline – and it can't happen fast enough. By Caroline Fraser

Rewilding the World: Dispatches from the Conservation Revolution
"With this book, Fraser does for rewilding what David Quammen did for island biogeography in his seminal "The Song of the Dodo." Fraser uses lucid prose, engaging stories and personal experience to make the ideas accessible and vital to a wide audience."--Los Angeles Times Book Review

"Eye-opening...The most powerful and persuasive attack on Christian Science to have been written in this century."--Martin Gardner, Los Angeles Times Book Review

"'A Strange, Bloody, Broken Beauty,'" The New York Review of Books, May 27, 2010
A review of Joyce Carol Oates' Dear Husband, and Little Bird of Heaven
"So Fresh and Bloody," London Review of Books, December 18, 2008
Review of Red Mandarin Dress, by Qiu Xiaolong

Links to articles, reviews, and discussion of God's Perfect Child and Christian Science 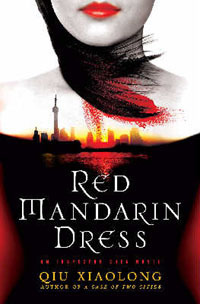 "So Fresh and Bloody," a review of Qiu Xiaolong's Red Mandarin Dress

In 2006 the Wall Street Journal declared Qiu Xiaolong’s first novel, Death of a Red Heroine (2000), one of the top five ‘political novels’ of all time for its indictment of Communism. Many of the crimes in his books have their roots in the repression of the past, but Qiu’s series about Chief Inspector Chen Cao – after Death of a Red Heroine came A Loyal Character Dancer (2002), When Red Is Black (2004), A Case of Two Cities (2006) and now Red Mandarin Dress – is actually less concerned with politics than with the contrast between victims and perpetrators. At first glance, Inspector Chen, an ‘emerging Party cadre’ and the head of a special squad investigating sensitive political cases for the Shanghai Police Bureau, is almost laughably soft-boiled and mild-mannered. Qiu was born in Shanghai and now lives in St Louis, Missouri, but Inspector Chen, an amateur poet and ‘filial son’, seems to have more in common with the heroes of British police procedurals such as P.D. James’s Adam Dalgliesh (also a poet) or Ruth Rendell’s Inspector Wexford – decent sorts whose investigations invariably end with balance being restored to a fundamentally rational social order – than with the violent American breed.